Calgary (Rural Roots Canada) – It wouldn’t be the Calgary Stampede without the Vintage Tractors.

The mighty machines roared again into the Greatest Outdoor Show on Earth this year.

Colin Woodley from Blackie, Alberta, competed in his third vintage tractor pull at the Stampede, riding his 1957 John Deere 820, which he found sitting in a shed.

“When I bought it, it was in the dirt, in a shed, bounced into the ground right to the rims,” says Woodley.

“This machine is special and magnificent to me. I had looked for one of these for a long, long time and there’s not a lot of these around anymore.”

READ MORE: Stopping vintage tractors in their tracks: the art of sled pulling

Woodley says, all things considered, the John Deere was in excellent shape. 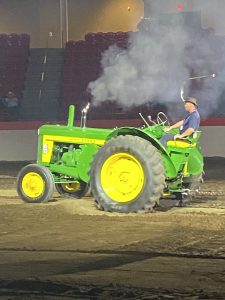 “This one came to Valleyview, Alberta. It was on a sawmill, born to a sawmill and never did any field work. It had never been tortured. All it did was belt work.”

Still, Woodley says it needed some elbow grease to get it going. On top of bearing and cylinder work, the pup motor wouldn’t fire.

“The pup motor was frozen. Back in the day, antifreeze was expensive so they would use water. If you didn’t drain it annually in the winter before we had freeze-up, things like that would happen,” he explains.

RELATED: The Next Generation of Vintage Tractor Pullers: Spencer Jensen

“The starting motor was cracked and broken and of no use. So we turned it over to an electric start which it makes very usable by today’s standard. You hit a button and away it goes.”